I was finishing off some notes on my Open University degree module last night when mister (cat) decides to bring an adult rat in with him to present to me as a gift. He has never managed to catch something that large previously. I made sure that it was dead before I scooped the rat into a dustpan and put it back outside. I was afraid of being bitten because I know that they get vicious when threatened. I heard a squeaking noise thinking he had just caught a small mouse (this is what normally happens). I turned around to find him carrying an adult sized rat. Luckily he killed it quite quickly so I wasn’t dealing with a live rat but it was still a shock. I was just about to close all the windows to get in bed. I then couldn’t settle because the thought of rats just made me a bit restless. I spent the next 3 hours after that colouring an art therapy magazine picture and also modifying it a little bit. These two photos below sum up the nocturnal hours of various things that occurred while most people are asleep (apart from me which I’m working on). 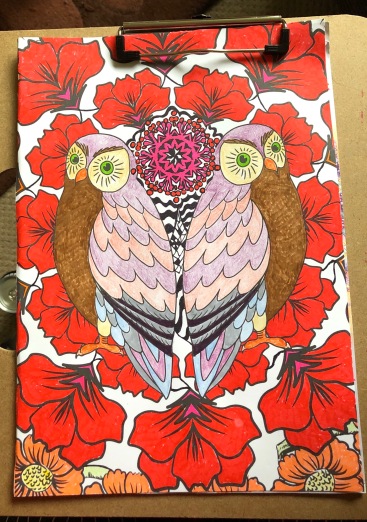 Follow Diary of a Painfully Shy Introvert Blog on WordPress.com