I haven’t really been awake a lot today because I feel rather ill. It’s just the normal monthly crap as well as an added stomach upset. These can happen together anyway. There are many symptoms hormones can give you and they vary. I have quite severe stomach ache still but I think the worse of it is over. I had a nice bath and did some of the housework. I’m now in bed by 11pm (I know that is really early for me) and just settling down for the night. I have to go in to my Maths lesson tomorrow morning because I’m too near my exam to have this week off. I’m sure that I will wake up back to normal. I have rested all week so surely I’ve done enough to be able to get a little bit better at the very least.

I’m not finding physical illness challenging right now. I am more depressed than I have ever been in my life before. I just don’t want to go out of the flat. I haven’t been out all week and even nipping the supermarket has felt a struggle. I don’t know how I’m going to force myself to do the last few weeks of college and the actual exam. I’m going to try but I am wanting to stay in my flat more and more. I’m on anti depressants. I found them a huge lift when I first got prescribed them, but now it’s like taking a sugar pill. It doesn’t perk me up at all. I’m on a very low dosage and would rather not go up on them as it is just a spiral of getting used to a certain dosage and then being put up, getting used to that dosage and being put up again. That is why we are a country that is getting fatter since the anti depressant prescription levels have risen.

The chemicals in these medications make the body absorb more fat because of their composition. The higher the mg of dosage, results in a higher level of fat absorption. That is why doctors measure the sizing of a person to decide the appropriate level of medication to give them because it’s a scientific balance that could have undesirable effects if not administered appropriately. The GP or psychiatrists aren’t a huge fan of my views because I will only take a minimum dosage of this medication. I am aware that I am petite built and the balance is easy to tip into excess fat absorption territory.

Also, I would like to warn others that are into any form of Wicca or Witch craft, that messing with evil energies/spirits is extremely risky. It should not be attempted unless you feel that all other options have been exhausted and this is the only way to rid yourself of whatever is causing horrendous strings of awful traumatic things to repeatedly occur in your life. I decided that I had absolutely had enough and I was getting rid of whatever had been hanging around me for years causing my misfortunes. I did the burning a piece of paper ritual which is effectively suppose to send away all negative or evil energies and form a protection around you. Well, this energy must have been extremely evil and powerful. The glass surrounding the candle actually shattered and exploded (as illustrated by the photo below). I got very ill afterward which I’m not sure if it was connected or not. I do feel better now though, so maybe the troublesome energy has left me alone. It’s been a long time coming as that hanger on energy has been taking liberties and causing me misfortune continuously throughout my life for far too long. I hope that if it’s gone back to a hell like realm that it spends it’s eternity suffering. 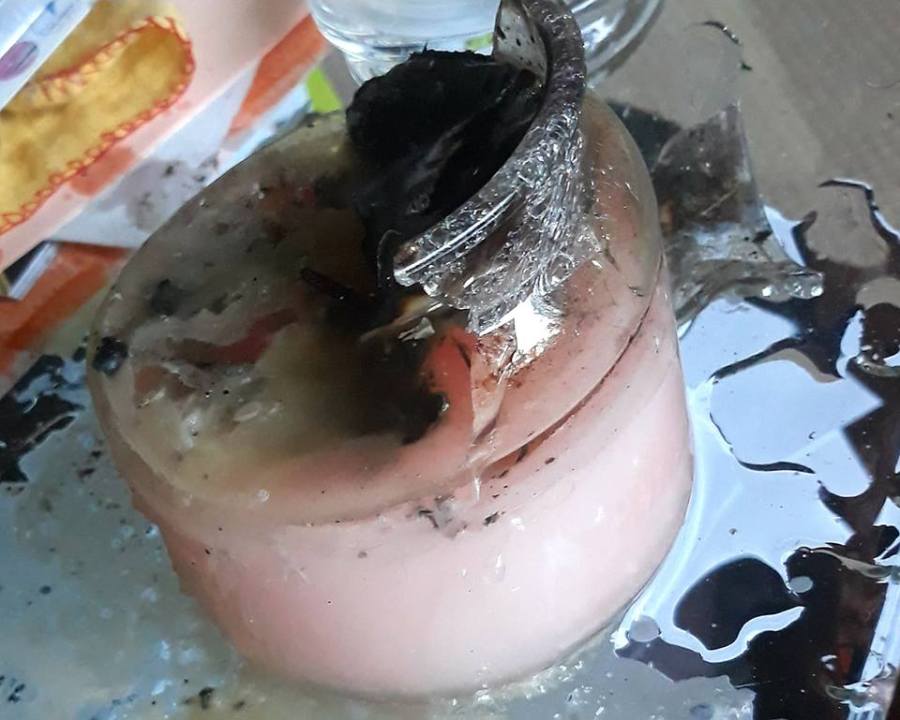